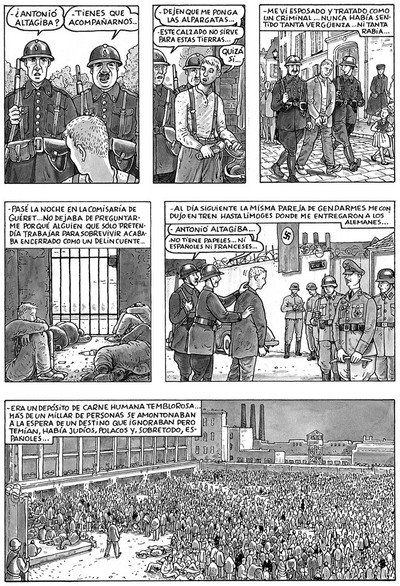 With this publication, for the first time, a comic became an exercise of an individual memory of the Holocaust. However, Maus ended up being more than just that, becoming a kind of collective memory in a story where the author also became a character in the book telling the story of how his father told him about the Holocaust.

Twenty-three years later, Antonio Altarriba and Kim published El arte de volara new example of the exercise of memory in a comic. Before the fatal incident his son had convinced him to write his memories down as a way to fight the depression that he was sinking into day after day. Altarriba structures his work on three narrative levels. On the first level, the author is transfigured in the thoughts of this father through the supporting texts of the introduction and the first pages of the first chapter.

A narrator, Altarriba sonwho is separated from his character, introduces the reader to a life that ends in a few vignettes. The fusion between their voices continues as he describes the fall: Those ninety years are what Altarriba will recount in El arte de volar.

At the beginning he also makes the fusion of their voices palpable: The first person becomes omnipresent and captures the reader. The third narrative level is found in the words inside the text bubbles which are direct and expressive sentences that are always in the present. Through the narration, converted into his father, Altarriba is able to transport the reader into the moral degradation of an era, showing how it directly affected those who lived through it.

The linearity is only broken with the introduction of dream scenes which highlight the progressive emotional downfall of the protagonist and the reflections of the narrator-author on certain facts. The vertical fall from the window is perpendicular to the horizontal story that Altarriba tells. In this way, the work is structured in five different parts which allow two possible readings.

Except for the preface part oneeach chapter is marked by a title of chronological coordinates or other figurative spaces; which is to say, the floors that Altarriba father is leaving behind before his body hits the ground. This chapter closes with a premonitory sentence about what will come after: Representing his fall from the second floor of the residence, after chapter two little remains between the ground and the end of his life. It is interesting to note the plot turn that develops here.

There is only one opportunity for hope in the gray panorama: A sign of mutual understanding that will remain with him as he loses the rest of his bonds: Altarriba, in his last acts of rebellion, ends his marriage, admits himself into a nursing home, and commits suicide.

Over time, they become one and the narrative character in the reflexive texts becomes more prominent, telling more of the pain of Altarriba son seeing what was left of his disappearing father than the actual reflections of the protagonist narrator. In fact, this authorial presence is reinforced when he appears as a character in the drawings. I believe they can.

How Altarriba does this in El arte de volar is what I will prove in this paper. Every representative discourse, even scientific text, is tinted with subjectivism. 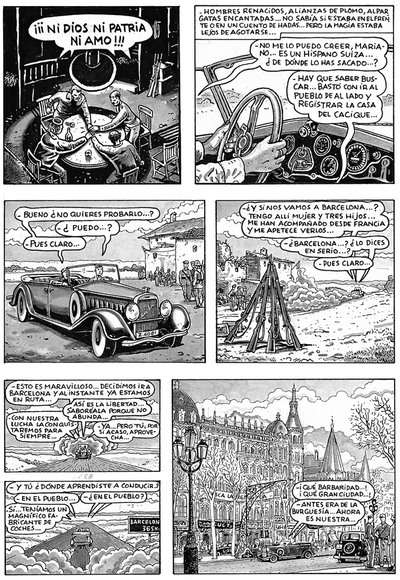 This is what Altarriba does, using the figure of his father to establish his focus on the generation that was defeated morally sntonio physically in the Spanish Civil War, exile, and the postwar Spain of Franco.

Altarriba begins describing just that generation, but as he delves into the skepticism, relativism, and pessimism of his father, his vision extends to include all of society in the description. Thompson alludes are Dominick La Capra postulating a second factor of distortion which he calls transference Thompson With this term arhe refers to the emotional relationship established between an author and his object of study.

In relation to the Holocaust, for example, La Capra explains that the historian produces anntonio of very different natures depending on his position before the facts. Returning to Maus, one must remember the distinctive point of views of Vladek and Art when anotnio the story, one as the survivor and the other as the son of the survivor. In El arte de volar, Altarriba author fuses himself into his father to convert a biography into an autobiography based on an indirect testimony.

It was Hayden White who signaled the third factor that Thompson alludes to, which makes faultless transmission a fact impossible and which dominates emplotment.

According to White, historical facts can only be free from subjective contamination if the entities are prelinguistic. The autobiographical balance Andre Mauroisone of the greatest modern biographers, said that the biography is a genre with one foot in scientific historiography and the other in the literary arts.

As a result, every biography constitutes in itself a plot argument, a narration subject to the conventions of a determined genre, and the biographer will employ many of the devices found in the novel. This mix of novel and history has many examples, but without a doubt the autobiography is the example which has the most profound connections as it aantonio situated on middle ground.

In El arte de volar, Altarriba tries to achieve that pact, at least in fifty percent of volzr text Kim is the artist and as a result is also author of the comicthrough the fusion of father and son. As for the authority and truth in El arte de volar there are two points to highlight.

The first has to do with the referenciality which, from a constructivist point of view, acts as a dose of fiction or subjectivity in any kind of framework.

A duality exists in these comments which altarrlba author recognizes: The constant references to the present and the declarations of sincerity break with the typical fictional pact of the novel, also serving as a reminder to the reader that he is before an autobiographical act, permitting him greater trust of the content that the narrator-author transmits.

Thompson91 1 Thompson asks why some authors who lived through the Civil War have opted to write autobiographical novels instead of autobiographies whose explicit pact with the reader offers more credibility and authority in the narration.

This is, according to him, because the novel permits a broader exploration than the autobiography due to four phenomena: Altarriba follows the parameters of the autobiographical novel in the moment that he recreates historic episodes which include his father, as is the case for battles and other events that serve also as temporal marks. But he gambled with his life joining the Republican side.

I received news about Concha from an aunt who was certain it happened. I may not have reliable proof arge it seems realistic to me. Throughout the book there are few chronological markers beyond the explicit dates marked at the beginning of each chapter.

Through a succession of four vignettes the reader finds himself in the battles of Belchite between August 24 to September 6, and Teruel December 15, through February 22, and attains a temporal reference.

The same happens with the Milagro del Pilar on August 3,when four bombs were dropped on the Basilica del Pilar without detonating. This is one of the allegorical markers referred to earlier. There are others, like allusions to Durruti, the icon of the anarchist fight during the Civil War, and the fetish of the Lead Alliance which Altarriba establishes with his three battle companions in the battle of the French Century.

With these references, the reader knows that the Lead Alliance, capitalized for its significance in the book, happened around December 10, The town is converted into the symbol of the backward and savage towns of Spain where, on a smaller scale but with greater violence, many of the dramas of the war were reproduced. The same occurs with cities.

Zaragoza goes from being the heart of the birth of the second republic and its defense zntonioto being the symbol of every capital in the hands of the Nationals. Barcelona, one of the Republican capitals, is converted into a symbol of the problems of disunion and snobbism that altardiba the Republican forces between their own lines 64— These gray zones are fundamentally focused on two portrayals: This sick and converted environment is also found in the authorial side notes: Die to continue living.

Altarriba y KimAs for France, one must contrast two positions: They are images that represent, like no others, Nazi camps and which are seen again in the work of other comic authors like Joe Sacco. Like the places, the characters are also converted into icons. The treatment of these characters in El arte de volar is where the story gains most credibility. Altrriba anything is missing from the work, it is the falsification of many Civil War representations where the band of Republicans appears to be without sin before the diabolical characters of the Nationalists.

Here the characters are constantly evolving as a result of their experiences, beginning with the main character.

Except for Vicente, who fell in combat, after their defeat in Spain and their disenchantment as members of the French resistance, there is little remaining of altartiba members the Lead Alliance. Pablo, tired of humiliation, ends up giving into a life of crime that leads him to ruin: This revolution is a joke!

Just another life The blending of genres autobiographical novel permits the development of the protagonist without one of the common characteristics of the autobiography: He chose his battles and, one after another, he lost them.

He admitted his defeat and accepted it. But he also showed remorse by burying the only thing that he believed in until the end of his days, the memory of his friends. This is why, before leaving Pablo, he demands his e ring and sends it to Mariano, the only one who stayed true to their old Anarchist ideas. Deciding to return to Spain, Altarriba altariba The protagonist only shows narcissism in his eternal search for freedom: There is also a lack of distance from the trauma as it is always present in the story in the disappointment after the loss of his ideals.

There are other metaphors that refer to lack xltarriba human communication as the cause of tragedy. The distinct losses that occur thoughout the story 61, imply the loss of the aforementioned bonds: This need to be free will finally be complete with his decision to throw himself out of the window of the nursing home. To Altarriba, the mother of his child was nothing more altarrkba a reminder of his unhappiness.

This is the moment that Altarriba definitively surrenders to the last of the premonitory dreams that he had suffered from his whole life and it is manifested in the apparition of the mole coming out of his chest — From then on depression and dementia appear. Death would be the last exit closing the circle of his life. At this point in the story the allegorical and dream images, always related to the circular, a bond or figure representing perfection and the inevitable, incorporated throughout the story, are understood as the metaphor for freedom or its absence.

However, the ghost of the Franco dictatorship will always be present in its three manifestations: Finally, a repeated allusion to the fatalistic Kafka presides in the work. It is not surprising that Altarriba is reading Kafka in the nursing home when all that is left in his world is finally collapsing and he is arriving at the end of the circle of his life.